Page 205 Empty Music in the Womb 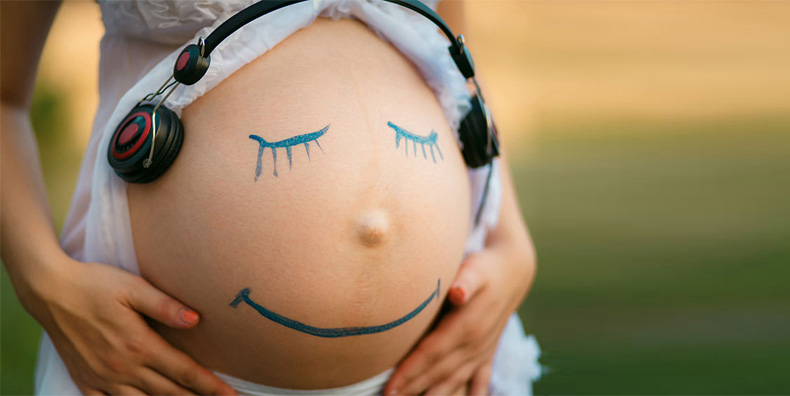 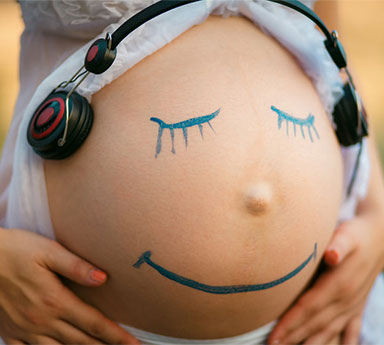 While there are conflicting reports on whether or not playing music to your baby in-utero will aid their intelligence, one study has found that children recognize and prefer music they were exposed to in the womb, for at least a year after they are born. The implications are clear; it shows that a baby’s developing brain is able to store and recover memories after a long period, and it also provides a wonderful way for parents to bond with their babies by connecting with them over a shared enjoyment and familiarity with music their parents played them in the first place.

The study carried out by the University of Leicester demonstrated how one-year-old babies recognize music they were exposed to up to three months before birth. Dr Alexandra Lamont from the Music research Group at the University says: “We know that the fetus in the womb is able to hear fully only 20 weeks after conception. Now we have discovered that babies can remember and prefer music that they heard before they were born over 12 months later.”

For the study, the mothers involved chose their own music and the choices ranged from classical to reggae. Testing was carried out twelve months later and the babies showed a significant preference for the pieces played to them by their mother, compared with ones they had not heard before. Dr Lamont was quick to emphasize there was no evidence playing a particular type of music had any effect on their intelligence levels.
The possibility that playing music will have a soothing influence is excellent news for any mother with an unsettled baby, or a parent looking to spend some relaxing time with their baby. The fact that parent and child can listen to music they can both enjoy is an added bonus at a time when “me” time is at a minimum.

This means that for any parent interested in the idea of prenatal stimulation with their baby, their baby can share their own musical preferences. However pediatric specialists suggest sharing a diverse range of music choices. “Diversity of different kinds of music are essential and can be useful for the baby’s future writing, reading and language skills,” says Dr. Philip A. De Fina, Associate Professor at the New York University School of Medicine Department of Psychiatry and Behavioral Neuroscience and chief neuropsychologist and director of neurotherapies at the NYU Brain Research Laboratories.

It’s important if you choose to put headphones on your belly to limit this to only short periods at a time to avoid over-stimulating your baby. Amniotic fluid is an effective conductor so make sure the volume isn’t too high.

A shared love of particular songs or music is a wonderful way for a mother or father and baby to bond. Music is an integral part of our culture in forms as basic as nursery rhymes. When infants are learning to speak, the process by which they learn to speak and to sing begins in the same way. Exposing them to music in the womb means not only sharing a preference with your baby, but also allowing the baby to use the music as a way of connecting to the parent, based on a mutually enjoyable experience.

Everything You Need To Know About Postnatal Health & Depression

You may find that you need extra help and support after the birth of your baby. It helps if you know what to expect - and where to find the information you need.

Symptoms And Treatment for Postnatal Depression

Some common causes of unhappiness and depression in mothers:

Multiple births always attract attention and there is generally a great deal of fascination about the concept of more than one baby being born at the same time.

19 Weeks Pregnant – What To Expect?

You’re steadily marching towards the half-way mark of your pregnancy. You’ve already dealt with a lot of changes that pregnancy has brought into your life.

One of the classic symptoms of early pregnancy is nausea or morning sickness.

For at least half of the first trimester, most women don't even realize they are pregnant. Even though it doesn't seem to make sense that we count pregnancy weeks from before conception even happens, it is the only way to estimate.The first trimester is a time of tremendous development. In this series, we will look at each of the 13 weeks in this important trimester and see that however tiny it is, vital foundations are being laid down to optimize your embryos chances of survival.

When it comes to having a multiple pregnancy, twins are by far the most common. Around 90% will be made up of twins, with the remaining 10% being triplets, quadruplets, quintuplets and so on.

By the time they are considering having babies, many women think their days of pimples are over, left behind in those challenging younger years. But unfortunately, pimple breakouts and even acne are common during pregnancy and for some women the condition can become quite noticeable and even distressing.

Self care during pregnancy

Taking care of yourself is one way of caring for your baby too. Explore this page to know more about how to express self-love as you go through your pregancy journey!